This post is designed to be linked to in crawlspace proposals provided by Stetten Home Services.

We are champions of the floor insulated sealed crawlspace because we have data to prove that sealed crawlspaces with “no insulation” or “floor-insulation” perform about equal to those with “wall-insulation”. Its a sealed box with no windows or doors and generally equipment/ducts actively helping with temperature control. There is a circumstance where this is not the case, and that is when the crawlspace has a very large volume, which often means it also has a “pony-wall”. Below is an extreme scenario:

^I hope the framer got paid for all that foundation work!^

As you can see above, there is considerable area where the foundation wall is plywood not concrete blocks and maybe saved the builder money and time. (SIDE NOTE: Foundation vents are supposed to be in the “upper strata” where humidity collects. The vents being located like the above picture, nearly hugging the ground, do very little to remove the upward moving trapped humidity which impacts the home.)

According to other sources and our measurements and experience, concrete block walls have better thermal resistance and air-tightness than stick-framed, open-stud construction, making them the weakest link, when present, in floor-insulated crawlspaces. Framers required to use “sill-seal” will often not use it for pony-wall connections to masonry walls. Tall crawlspaces have a higher “load” due to the surface area ratio. There is simply more fluctuating exterior surface temps compared to the earthen floor surface which remains a nearly constant, rather comfy 60F-65F temperature year round. Sometimes the sun hits foundation walls and heats them up, and sometimes they are freezing, and sometimes they have large and long and repeated gaps, so floor-insulated crawlspaces with large walls don’t perform as well as well for a few reasons. This above home had enough room for a furnace and a water heater which were maddeningly not located in this crawlspace.

The space between the studs is simply dead space when we use our 1/4″ thick foam insulation to cover the entire wall. If you were to insulate it with fiberglass or spray-foam between the studs you would be insulating only about 70% to 75% of the wall leaving the framing’s edges exposed. This reflective insulation product is an air-barrier and vapor-barrier and radiant barrier and has an impressive R-Value. This is vastly superior to “bubble wrap” or “reflectix” which you can find at home improvement stores.

The above sealed crawlspace floor insulation continues to work, and it works better because we add more insulation support wires, and the annual temperature swings are minimized now that it is “sealed” from the ambient environment. The delta-T is never more than 8F.

The owner saved money keeping the insulation intact from when the crawlspace was vented; no removal, no replacement. Given that our crawlspaces are generally so conservative scope and cost-wise there is generally money in the budget for the additional say $850 or so for wrapping the walls like this. We often remove temporary braces left in place by the framer from before the plywood was installed to make the work more proving of success. 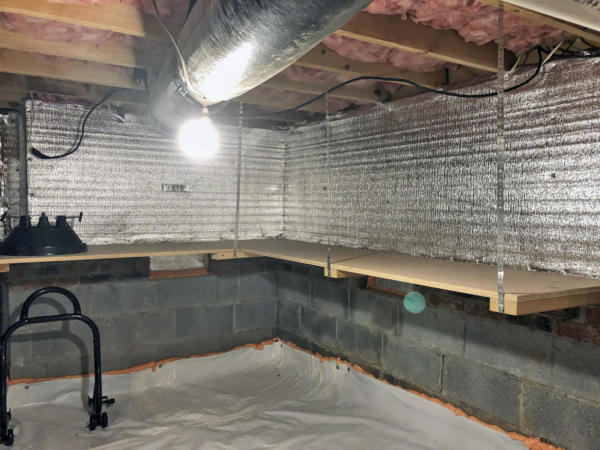 Above we have added shelving in a most efficient way as the concrete wall acts as a ledger and perforated strapping to support the front edge takes up almost no space. In areas like this we tend to install more construction lights. to make it more useful and we are careful to keep the shelving out of the shadows so this light is directly beneath the duct and floppy. 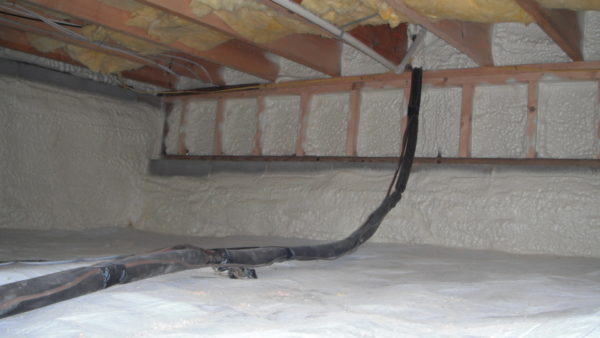 This is an old picture from 2010 but you can see how the pony-wall still has a still un-insulated frame consisting of vertical studs, two top-plates, and a bottom plate. I would argue that 1/4″ continuous, full-coverage, reflective, dead-space assisted, roll-type, staple-applied insulation is a better value, but we were already there spraying foam, so this made sense. About 25% of typical building envelopes are un-insulated due to framing and “thermal-bridging”. 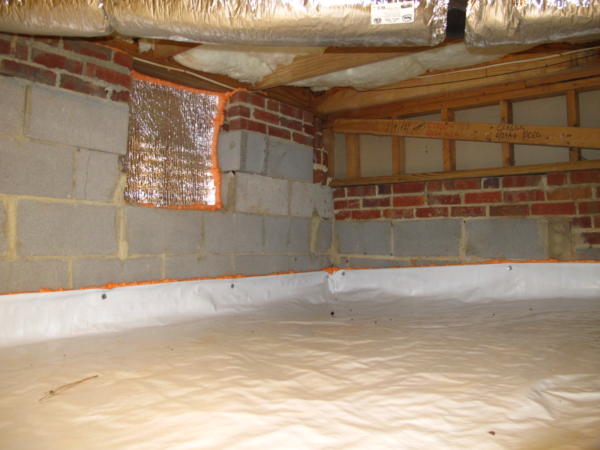 The above client did not opt for the pony-wall insulation and has an annual delta-T fluctuation of about 20F. 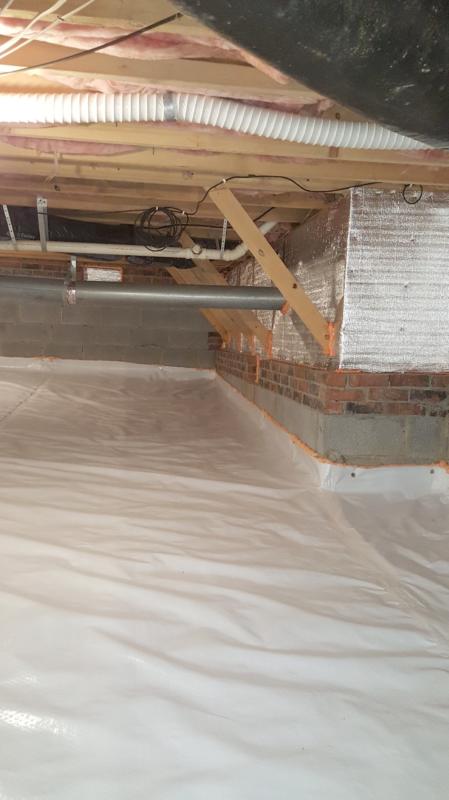 We do not remove cross-braces unless they are obviously redundant. Generally they are not redundant when they are perpendicular to the wall. The ones that are in-plane with the wall are installed prior to the sheathing to keep the framers safe until they later install sheathing around the entire perimeter.

We use basic OSB because the environment is favorable and cheap was the goal.

The slats from a discarded ikea bunk-bed were used here to strengthen 1/2″ osb.

We used HVAC metal-strapping to hang the shelves from the floor-system and rest the other side on the masonry ledge.